3Dprinting is a technology that enables the production of 3D models by the addition of layers - a generic name of additive technology, often referred to as Rapid Prototyping. The largest share of 3D printers market has hobby 3D printers working on the principle of FDM technology, which are offered either assembled or in the form of a kit. The cost of these printers in the form of a kit starts already at about 10 thousand crowns, assembled and tested printers begin at the amount of 30 thousand crowns. Part of the printer's delivery is usually a program to generate a nozzle path in the construction of a so-called g-code model. In this program the basic parameters of the built-in model are set, eg the density of the internal fill, the number of peripheral layers, the generation of supports, etc. The first picture is the screen of the 3D printer control program UP !, the file is loaded in the format .stl (the roof of the Mariánské věže na Karlštejně) , Two open menus for setting the model parameters are displayed. In the second image, the same model is loaded into Repetier and generated data for printing on the FELIX printer. In this case, the generated data is played back on the memory card and sent from the control panel with the display at the bottom of the printer for printing.

Once the model is sent for printing, the data is played back into the printer's memory, and then prints automatically without connecting to the computer. All 3D modeling devices work on the principle of distributing the computer model to thin layers and then building them into a real model in the printer's workspace. The model is built on a motherboard that drops down just after the thickness of the layer. 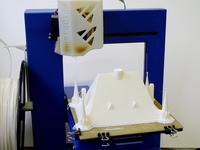 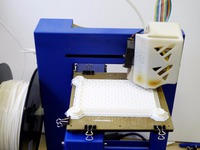 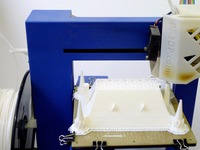 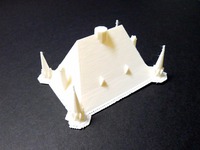 The 3D printing area is constantly evolving and, in addition to the most common technology of extruding material from heated nozzles, there is a wide range of other technologies used to build models, the following overview lists some of them:

We use cookies to enable the proper functioning and security of our website, and to offer you the best possible user experience.